In Praise of Crazy Dreamers

These last few days have confirmed for me the value of persevering toward our dreams. On Friday (June 5) I received a publisher’s draft of my forthcoming book White Allies in the Struggle for Racial Justice (due out Fall 2015).  Approximately four years ago I began researching and writing the stories of White folks in U.S. history who had sought to be allies with People of Color in the struggle for racial justice. In the Spring of 2014 a publisher (Orbis Books) agreed to take a chance on the topic and I finished the first draft. In the last year there have been countless re-reads, rewrites, and edits to the point I thought it would never end. There were many times  early in the process I despaired of finding a publisher, but even after the publisher agreed to work with me, I wondered if it would actually come to be. This Friday, seeing my words in book template form was the first time I really believed it would happen.

Despite my proliferation of blogs, writing does not come easy to me. I am truly in awe of people who write for a living or who write profusely. A musician friend of mine once told me that being a professional musician is 10% inspiration and 90% perspiration; I feel the same way about writing. I thoroughly enjoyed researching and interviewing the subjects in my book. I came to feel deeply connected to them and their stories inspired me. I even convinced myself that if the book never got published, simply learning and engaging with these amazing people was worth the effort. On the other hand, the writing has been laborious, frustrating and exhausting. So to realize this book will actually come to be makes me truly grateful. While I still have to re-read and edit the manuscript one more time, soon this book which was only an idea four years ago, will become a reality.
However, even more inspiring was an event I attended on Saturday (June 6) morning at Sweet Union Baptist Church in the Carroll Park neighborhood of West Philadelphia. Over five years ago I began talking with Zack Ritvalsky, pastor of the church and learned of his vision to transform the Carroll Park neighborhood. One day he came across something called the Mondragon Model of community development. In 1941 a Roman Catholic priest, Jose Maria Arizmendiarrieta was sent to a small parish in the village of Mondragon located in the mountainous Basque region of northeastern Spain. Father Arizmendiarrieta started a technical college that taught business skills, as well as the basic principles of Catholic social teaching. In 1955 he selected five young men to start a cooperative business, who decided to pool their profits and then give money back to the community to start new coops. Today the Mondragon Corporation oversees 250 cooperative business ventures around the world, all built on the simple vision of worker-owned cooperatives giving back to their communities, and allowing people to own a part of their livelihood.
Pastor Zack shared the Mondragon model with some people in his church and neighborhood, and

soon 50-100 people began meeting monthly and working together toward the realization of several ventures, one of which was the HMC Squared Realty Development Group that would purchase vacant properties in the neighborhood, fix them up of with as much local labor as possible, and re-sell to local residents at a modest profit. The profits would then be recycled back into a fund to purchase, renovate, and sell more houses. In this way members of the four neighborhoods of Haddington, Morris Park, Cathedral Park and Carrol Park (from which HMC2 gets its name) could own their neighborhood and protect it from real estate speculators looking to flip cheap houses and make a huge profit, thereby driving local residents out. The idea for the Realty group to start was for individual investors who either work, worship, own a business, or are involved in the betterment of the community would buy up to five units at $2000 per unit as an investment which would develop the capital to begin the process of buying and selling houses. For over two years members of HMC2 have been working through the legal and financial logistics to bring the Realty Group into being, and today the first of 500 available units went on sale and were purchased. It was the realization of a dream that not long ago barely seemed possible in this low income urban community. While there are still a lot more investors who need to be brought on board, the process has begun!

In his book The Answer to How is Yes, Peter Block says that too often we sacrifice what really matters in life to what seems “possible” and “practical;” in doing so, we too quickly forsake our passions, values and dreams. Block writes: “The price of practicality is its way of deflecting us from our deeper values” (p. 25). Block is not suggesting that we should not plan and seek to take practical measures to achieve our goals, but he is suggesting that too often we allow the tendency to be “realistic” to keep us from following our dreams, pursuing our passions, and living our lives according to our deepest convictions.
These past few days I have experienced how the impracticality of pursuing a dream can actually pay off, and how what seems improbable, or even impossible, can come into being. In the ancient Hebrew prophetic book of Jeremiah, the prophet buys a field outside of Jerusalem just as the city is about to be captured and destroyed by their Babylonian enemies. Jeremiah has been tortured, discredited, and dismissed as a nuisance; no one is paying attention to him or his message. Nonetheless he buys the field as a concrete testimony to his belief that one day God will restore the city and its people to a life a peace and prosperity; at the time such a belief was not only considered impractical, it was ludicrous. Yet Jeremiah prevailed with his crazy dream of a new Jerusalem, and eventually it came to be ( See Jeremiah 32).
So here is to crazy dreamers – like Jeremiah, like Pastor Zack and the members of HMC2, and to one would-be writer who wanted to share some stories about some other crazy dreamers. May we always follow our passions and visions in spite of what seems impossible. 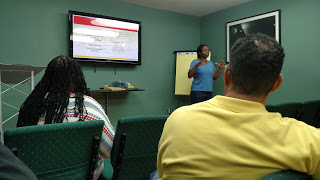