If You Don’t Know Where You’re Going ….

Minneapolis, Minnesota was voted the best biking city in the country in the worldwide index of bike-friendly cities, and number 18 in the whole world. Thus, every time I have the opportunity to visit Minneapolis, I try to take advantage of their vast network of bike trails in, thru, and beyond the city. Last weekend I went there to celebrate my  nephew’s wedding, and rented a bike for the three days we were there. Between family gatherings, and wedding events it was a full weekend, but I managed to get some great rides in. However, on the last ride on Sunday afternoon, I had an experience that shook me up.

I had been up late the two previous nights with the rehearsal dinner, a family gathering, and the wedding reception (which included about three hours of dancing), and then had gotten up early on Sunday for a picnic brunch. So I was physically and mentally tired. However, after putting my daughter and son-in-law on the plane back to Philly and saying goodbye to another daughter and her partner driving back to Chicago, I decided to take a short 10 mile ride on the north side of the city. My plan was to go along the Mississippi River on the east side, go across the north side of city and turn south at Theodore Wirth Park (named after the great urban theorist from University of Chicago) and head home. All was going well until I came to the park.

I pride myself on having a good sense of direction, and so at the park I turned onto the trail that seemed to be heading south. By this time I had ridden 7 or 8 miles and the tiredness in my bones had dissipated, and I was feeling good on this ride. However, it soon became apparent when I saw a water tower indicating the name of town in the western suburbs that I was not going south. I pulled out my trail map and phone GPS and sought to right my course. However, my GPS for some reason kept taking me west, and when I pulled out the map again, I thought I figured out where I was on the map, and only later realized I was sadly mistaken. Eventually I came to a highway, I knew ran east and west, and so rode on the shoulder for a couple miles until I realized I was going further west and not east as I planned. I consulted my GPS (which to this point I still thought was leading me in the right direction) and followed its directions until I finally stopped and asked a walker where I was and how to get to Minneapolis. 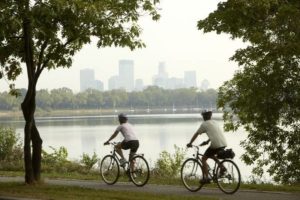 To make a long story short I was so off the track, she could not locate our location on the map. I eventually found my way back to the highway, again made the mistake of going west rather than east. At that point, I had gone nearly 30 miles and knew that while my body felt okay my mind was weary and confused. So I called a third daughter to come get me (thank God for daughters), giving her the name of the highway, a cross street and the name of nearby restaurant. She, her partner, and my wife rescued me. When I eventually saw on a map where I they had found me, I was astounded and baffled how I had gotten so lost. I was easily 10-15 miles outside the city to the north and west. When I thought I was going south I had gone north and had gone west when I thought I was going east. I was glad to be rescued but for a couple days was emotionally shaken by my miscues.

One of the mottoes I have tried recently to live by is to “Take One Day at a Time.” When riding my bike I translate that to “one mile at a time” and “one hill at a time.” However, whether talking about days, miles, or hills, the one-at-a-time philosophy only works if there some overall sense of direction one is following. This reminds me of another saying that has informed my proclivity for personal planning, which is “If you don’t know where you are going, you will probably end up somewhere else.”  While I THOUGHT  I knew where I was going, I clearly did not, and so ended up totally in a place I never intended to be.

There is a metaphor for life here.

These days I find that the course of my life is more like that bike ride than I care to admit. I find myself in a work situation facing challenges and limitations that seem to be forcing me to act and respond in ways counter to my basic principles and values. At 63 years of age, I am beginning to think about retirement and what that might entail, and what my life would be without the responsibilities  and challenges of the life of a college professor. As a father I see my daughters (all of whom I am very proud) making life choices I could not have predicted or anticipated. Physically, spiritually, financially, mentally, socially and so much more I am going thru changes – some chosen, others not – that are both interesting and unnerving all at the same time. 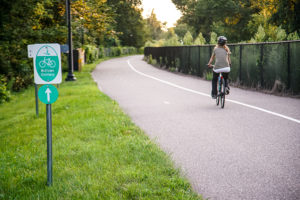 It is not that I am rudderless or clueless, but like my ride I often wonder if I know where my life is heading. Do I even know where I am on life’s map? Is my spiritual and mental GPS heading me in a positive direction? I am sort of at this point, where I am busy and active, but where is it all heading? I am not sure.

Throughout my adult life I have tried to have goals and a plan for reaching those goals. That has worked fairly well, but of late, I have found I have far less control over the events impacting my life than I thought I did. I have  come to realization that the whole notion of control is a mirage, the idea of a plan is at best a hope, and the belief that I have choices vastly over-rated. Life happens, and we end up responding the best we can.  In one week I learned of a friend having a stroke,  a relative also having a stroke, and a beloved colleague going into hospice for terminal cancer (he has since died). I look out on the events in the world be they natural, political or international, and realize that the world we live in is full of unknowns.

Now I could fall into despair and crawl in a hole, or I can realize that this is why we have others in our lives – friends, colleague, family, church members, even daughters. We need each other to face in the uncertainties of life. Meg Wheatley in her book Leadership and the New Science, compares life in organizations to what quantum physics calls Chaos Theory. That theory, as the name suggests, contends that interactions are seemingly random and unpredictable. Life is like that; we can make a wrong turn and end up far from where we intended. So then we call on others to help us find our way.

I was unnerved by getting lost because it reminded me (yet again), I am not the autonomous individual I imagined myself to be. I need others. I need the community to help me find my way – wherever it leads