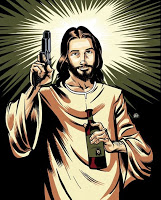 One of the things that Heeding God’s Call has done has sought to make the buying, selling, owning and using of guns an issue of faith. This expression of the gun violence prevention movement, which started here in Philadelphia, has drawn its base from the religious community, which has in turn given the movement respect and credibility in the wider community. However, by no means does that mean that the religious community is of one mind when it comes to the role guns do and should play in our society. Any Google search of “God and Guns” will turn up a host of websites and YouTube videos dedicated to the integration of God, Patriotism, Libertarianism and Second Amendment rights. On the other hand, a recent AP article reported that in Detroit pastors are carrying pistols into their pulpits and have organized armed “ministries of defense” to protect them and their parishioners during meetings together. I myself know pastors and Eastern University colleagues in Philadelphia who are not shy in admitting their ownership of a gun for their own safety.

While I am not against owning a gun per se (for instance I have many friends who are hunters), I am troubled by the intersection of faith and an instrument of violence, especially when that instrument’s sole purpose is to shoot, injure and possibly kill another human being, even in defense. This is the only use for handguns. At issue for me is not simply whether a Christian is justified in using a gun against another person either in war or in self defense, but rather the mistaken belief that the capacity to inflict violence of any kind against another person somehow makes them stronger and morally justified.

This “myth of redemptive violence” as Walter Wink calls it essentially believes that if I am wronged or injured by another’s use of violence, I am justified in getting even. This myth of redemptive violence is at the heart of nearly every cop show and “kick-ass” movie out today. This same myth dominates US foreign policy and has been the cause of all the deaths in Iraq and Afghanistan. As the myth goes in US foreign policy, if we can somehow catch and kill Osama Bin Laden, the other leaders of al-Qaeda and the Taliban, the world will be safer. What this line of thinking ignores is the verifiable reality that violence only breeds more violence whether on a city street or a mountain pass in Afghanistan. In fact it can be logically argued that the heinous 9/11 attacks that ushered in the “war on terror” were a response to U.S. military actions in the Middle East. Instead of pointing fingers as to who was to blame, we would do better to recognize that the pattern of spiraling violence feeds on itself, and no one wins, and no one is justified.

Moreover, fighting violence with violence does not work. In the article on the Detroit pastors, one of them was quoted as saying, “…the Scriptures are clear that civil authority is part of God’s plan…In our country it says in due process that you may bear arms to protect yourself. While we should be committed to trusting God, that doesn’t prevent us or command us to be totally passive.” By calling upon people of faith to take a non-violent approach I am in no way opting for passivity. The dichotomy between bearing arms and passivity is a false one. What people of faith have is the power of numbers and moral conviction. We don’t act in isolation expecting God to miraculously protect us from violence; instead we use the power of the message of love and justice working together in community to provide an alternative model of security and conflict resolution. While I appreciate the feelings of insecurity that lead people to pack a gun for protection, study after study shows that such practice makes our communities and homes less safe rather than more.

That’s why I continue to work alongside my brothers and sisters in Heeding God’s Call. While we don’t have all the answers, the power of our combined spiritual commitment is a source nonviolent power that can heal and provide an alternative to the discredited myth of redemptive violence.

A CALL TO ACTION – Heeding God’s Call goes to the PA State Capital in Harrisburg on November 19, 2009

The PA House Judiciary Committee is scheduled to hear testimony on HB 40 at the State Capitol in Harrisburg beginning at 10am on Thursday, November 19. Please plan to join your fellow faithful there to help bring some sanity to this issue. !

Background: The ‘Castle Doctrine,’ established in common law and statute since medieval days, grants a legal right to use force, even lethal force, against threatening invaders of residences. However, under current law in PA and almost every other state, a person who feels threatened in a public place has a legal duty to attempt to flee. Lethal force may be used only as a last resort.

HB 40, the gun lobby’s ‘Shoot First’ bill, would turn this on its head. Namely, HB 40 would grant a legal right to use lethal force, including gunfire, against any person felt to be threatening, virtually anywhere. The operative phrase, of course, is ‘felt to be threatened,’ which opens a huge can of worms and danger. All a shooter would have to do if ‘Shoot First’ becomes law is claim she/he ‘felt’ threatened in order to avoid liability for harming or killing another, threatening situation or not.

This is, of course, craziness of the first order and would replace the law and order of a civil society with a ‘Shoot First Ask Questions Later’ mentality more akin to the mythical Wild West than to 21st Century America. Again, all so the gun lobby’s patrons in the gun industry can sell more guns.

So, Heeding is in the midst of organizing a trip/meeting/etc. in Harrisburg for all concerned faithful, to oppose the abomination in God’s eyes that is the ‘Shoot First’ bill, to make our views known and to remind legislators that we and they have a religious duty, whatever the faith tradition, to seek civility and peace, not the fear and violence promoted by the gun lobby.