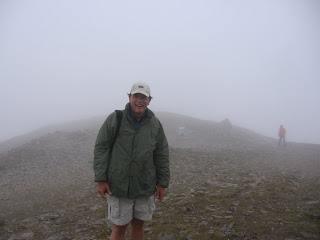 The most recent issue of Utne Reader (Sept/Oct 2007) featured a series of three articles discussing the role Baby Boomers can and should play in shaping and changing the world of the 21st century. Boomers are that generation of Americans born between 1946 and 1964 who currently makeup 20% of the population. Essentially, the articles centered on the question: Do Boomers have something to offer the younger generation in terms of wisdom and experience, or are they simply a generation of self-absorbed, would be do-gooders, who don’t want to grow up and will be a tremendous financial and social burden on the younger generations behind them? As a Boomer college professor and father of three young adults, and as one who spends a great deal of time around twenty-and-thirty-somethings, I had more than a passing interest in the discussion.

In the opening article, “The New Elders” Eric Utne and Richard Leider propose that because Boomers are working and living longer, they ought to focus on passing along the wisdom of their experiences, both positive and negative. They also propose that Boomers need to listen to Millenials and Baby Busters because they have mastered the world of information. The mixture of wisdom with knowledge could be a powerful combination. Of course, in order to mentor someone, you have to be asked.

That is the issue K.C. Compton takes up in the second article, “You Say You Want a Revolution.” Compton, a woman in her 50’s, recounts all the cultural and societal changes that came about because of the activism of the 1960’s and early 1970’s. She admits that Boomers can be “narcissistic and self-righteous,” but claims that her generation didn’t fail, they just got overwhelmed with all that needed to be changed. Compton goes too easy on Boomers. I remember thinking even in college in the early 70’s that most folks in my generation were shifting from a superficial commitment to change to an all-out embrace of materialism. We didn’t get overwhelmed; we switched sides.

The final article, “Tangled Up in Me” is written by Joseph Hart, a non-Boomer who basically thinks Boomers overestimate their worth and value. He writes, “the generation that exhorted us to never trust anyone older than 30 – then grew up and proved the point by ushering in the long nightmare of social conservatism and permanent war that is our current reality.” Hart’s critique is a bit harsh, as the Reagan era while supported by Boomers, was largely an attempt by the WWII generation to bring us back to an idyllic “morning in America” that never actually existed. Even so, he is correct in that the Clinton and Bush eras have been characterized by war, greed and corruption. Hart’s final word is “a higher road and more challenging practice [for Boomers] would be for them to shut up and listen for a change.” Ouch!

Recently at a conference on social change, I made a presentation on the spirituality of hope for political activists based on some of the writings of Paulo Freire. One participant asked me what gave me hope. Without so much as a thought, I said: “My children and my students.” While I read about how undisciplined and unfocused young adults are, I continually SEE and MEET young adults who are passionate, intelligent, and concerned for peace and justice. I see people who are writing, acting, starting businesses, working overseas, teaching, and raising families in alternative ways. These young adults give me great hope for the future. My own children are exploring careers and life directions pointed at relieving suffering and challenging injustice. As a result, I increasingly find myself sitting back and listening because I think they have great insights that still can make a positive difference in the world.

While it is a time when young adults are stepping up, it’s not a time for Boomers to sit down. I would hope we can learn and grow together and continue to address some of the major challenges that still face us: old, young and in-between.