Last night I decided to watch the 1976 award winning film “Network”starring Peter Finch as the crazed, mad-prophet newscaster Howard Beale. Both Finch and Faye Dunaway won Academy Awards in 1976, as did the screenplay. The movie begins with Howard Beale being informed that he was being replaced as the anchor for the evening news program of the fictional television network UBS.  The economy is in a slump, oil prices are rising, there is an air of uncertainty throughout the country and political leaders are not trusted (this is at the time right after the Watergate era and the Vietnam War). As Beale announces that he will be stepping down as the anchor in two weeks, he also proclaims that on his final show he will commit suicide on the air. This causes an uproar among the management of the network. After some back and forth, management decides to give Beale another chance to sign off appropriately and this time he announces that everything he has been talking about for the past 11 years has been bullshit. When he is given a third chance, he asks all of his viewers to go to their windows and shout as loud as they can “I am mad as hell and I am not going to take it anymore!” Millions of people across the country do as he suggests and overnight Howard Beale has become a cultural sensation.

Meanwhile the young, aggressive director of programming Diana Christenson (played by Faye Dunaway) is watching this. She realizes Howard Beale is a hot commodity and so convinces her bosses to keep Beale on the air as “the mad prophet of television.” So night after night Beale goes on ranting and raving about everything from the politicians to the oil companies to berating his viewers for being non-thinking robots who do whatever the people in charge tell them to do. He rants for a couple of minutes and then he feints night after night.  Ratings go through the roof. This show goes on for months until it reaches a crisis that brings the movie to an eerie and troubling climax. I won’t spoil the plot by giving the ending away, only to say that when it was over, I realized that 40 years later “Network” is still a powerfully relevant movie.
In 1976 “Network” was a statement about many things that were going on in the 1970’s, not the least of which was the complete control a few major networks controlled on what was news worth reporting. However, as I watched Beale rant and rave and stir up anger across the land, I could not help but think of Donald Trump and the violence that has begun to characterize his political rallies. Just the day before his campaign had to cancel a rally in Chicago due to the presence of so many protestors. A few days earlier in North Carolina a 78 year old Trump supporter sucker-punched a protestor as he was being led out by police. When asked about such incidents Trump either would say the protestors deserved it or as he said just today, he blamed supportersof Bernie Sanders for the violence; anything but taking responsibility for his divisive, polarizing, hate-filled rhetoric throughout the campaign.

In 1976 the message of “Network” was basically that the media was no longer interested in providing reliable and newsworthy information to the general public, but was about providing entertainment in the guise of news and making money by putting anything on the air that would get people to turn the channel to their station. Likewise the Trump campaign has not sought to offer reasonable solutions to the challenges facing the nation. Trump’s  success has been built on his ability to provide a regular stream of outlandish statements and outright lies that made good headlines.
Early on in the primary season, I kept wondering why Trump was getting so much free air time. Then I remembered that long ago I realized that the reporting on political campaigns was not about the issues or fact-checking politicians’ assertions; no, political reporting was about winners and losers and focus on the most extreme and controversial things any politician said.
It is because the media is not helping viewers make informed political decisions when they enter the voting booth; the media sees politics as entertainment and so the more outrageous, the better!

Just like Howard Beale, Trump is cultural phenomenon who has tapped into the frustration, disillusionment, and anger of a certain segment of the population. He makes outlandish statements like he will deport all undocumented immigrants, cause all Muslims to be registered, and “bomb the hell” out of ISIS, as if these are reasonable positions, much less constitutional or remotely feasible. Then he directly and indirectly encourages his followers to violence and blames someone else for the violence when it happens. 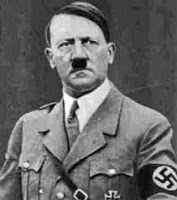 Howard Beale was a fictional character 40 years ago, but 40 years before Beale there was a real figure named Adolf Hitler who likewise stirred a nation to anger and insanity, and eventually dragged the whole world into a World War. Adolf Hitler’s end was tragic, as was the end for Howard Beale. What will happen if Trump continues on?
Mainstream Republicans are worried that Trump will become “their candidate.” However, if he does will they seek to stop him, or in the end will they fall in line like lemmings? And will the rest of us sit easy while a mad man stirs many of our citizenry to madness? By speaking out against Trump, I am not painting any other candidate as flawless, but Donald Trump has revealed an ugly side to our country that cannot be ignored.  Regardless what happens to his candidacy, the fact that he has gotten this far is an indictment against all of us who failed to stop him and a media industry that has allowed him to get this far.