Dog Whistle Racism and the Defeat of Debo Adegbile 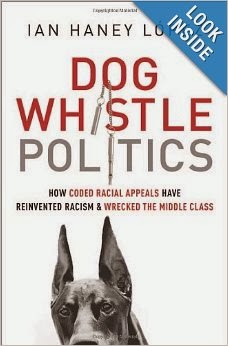 Last weekend during a  long 2 ½ day  drive from Minnesota to Philadelphia I listened to a podcast of the renowned PBS journalist and former White House staffer Bill Moyers interviewing legal scholar Ian Haney Lopez who has recently published a book entitled Dog Whistle Politics: How Coded Racial Appeals Have Reinvented Racismand Wrecked the Middle Class. In the book and interview Lopez describes how in order to win elections both conservative and liberal politicians have used language and images culturally coded to evoke racist stereotypes in order to motivate white voters. Through meticulous research Lopez shows how phrases like “welfare queens,” “law and order”, “war on drugs” and references to food stamps have been used like dog whistles to call upon deeply held prejudices and fears in order to seduce white voters to support efforts for less government regulation, cuts on corporate taxes, and a general distrust of government action, all the while giving more power to corporate interests control over American public life. Efforts like this have been used to influence white voters to act against their own self-interest and to increase the divide between the wealthy and the middle class, all the while scapegoating the poor and people of color in the process. More recent examples of dog whistle racism include the depiction of Obama as a Muslim and non-citizen, the relentless attack on “Obamacare,” support for reduction for food stamps, opposition to raising the minimum wage and antagonism towards immigration reform.   The language and images in each of these efforts call upon deep-seated, largely subconscious,race-based fears deeply socialized into most whites’ psyches.

So imagine my shock when I opened Sunday’s Philadelphia Inquirer to read that Senator Pat Toomey (Republican- PA) had led the fight to vote down the nomination of Debo Adegbile, President Obama’s nominee to lead the Justice Department’s Division of Civil Rights. Adegbile’s “crime” was participating in the defense of  Mumia Abu-Jamal,  a former journalist, radio host, taxi cab driver, and member of the Black Panther Party who was accused of the 1981 shooting of Philadelphia Police Officer Daniel Faulkner. While Abu-Jamal was convicted and sentenced to life imprisonment, his case has been the focus of controversy for the last 30 years. Abu-Jamal has always insisted on his innocence, and his case has gained worldwide recognition. However for police and their supporters Abu-Jamal is a pariah and a symbol of a cold-blooded cop killer. While I was not in Philadelphia at the time of the incident and only know what I have been able to read in the papers over the years, I have come to realize that there are two competing narratives as to what happened on the night of Daniel Faulkner’s death. To police it was a case of calculated murder. To many in the activist black community, it was a racist travesty of justice of an innocent man wrongly accused and convicted.

Enter Senator Toomey and Debo Adegbile. Because Debo Adegbile was part of Abu-Jamal’s NAACP legal defense team during a 2011 appeal, according to Toomey he is therefore unfit to be director of the Civil Rights Division. Forget the fact that all people accused of a crime, regardless of the crime, are entitled to a vigorous defense. Forget that as a defense lawyer, Adegbile is required to offer that vigorous defense. Forget the fact that Toomey could not find any public actions or statements by Adegbile about Abu-Jamal. Toomey gathered all sorts of documents and YouTube videos arranged to make a case against Adegbile but never even spoke to him. As a defense lawyer Adegbile was doing his job; defense lawyers by design defend people accused of a crime, but to Toomey that in itself is a crime.
Toomey’s actions against Adegbile raise troubling questions. Was Pat Toomey calling upon deep-seated racist fears to further his cause against Adegbile? Did he resort to silent racism to disqualify an otherwise highly qualified candidate? Was he even aware of what he was doing? What if Faulkner had been black and Abu-Jamal white, and Adegbile defended Abu-Jamal, would Toomey assume Adegbile unfit to serve in the government? Highly unlikely. Without mentioning race, Toomey played on racist stereotypes and fears, and won his fight to derail the nomination. Ian Haney Lopez says this is the essence of dog whistle racism: one does not ever have to mention race, the images and stereotype do that without the word being spoken.
By appealing to fears of a “cop killer” Toomey was able to cast Adegbile and Obama (who nominated him) as somehow seeking to undermine the justice system. The fact that Adeqbile worked for the NAACP and would head the Civil Rights division only adds to the race-based fears that somehow the justice system itself might be undermined. Never mind that it was this same NAACP that over 60 years led the fight to overturn the then legal process of racial segregation and oppression. Even now Michelle Alexander (author of The New Jim Crow) has shown how the U.S. criminal justice systematically and unfairly punishes people of color as compared to their white counterparts.  So the criminal justice system has many flaws both past and present. That someone like Adegbile might fight to correct something he believed the system did wrongly is what we would hope courageous people of principle would do. However, by choosing to stir up racist stereotypes and fears, Toomey and all the Senators who followed his lead, have participated in the basest form of character assassination against Debo Adegbile for sake of political gain, and we as a nation are degraded for having fallen prey to such a hideous and seditious racism.
I encourage you to listen to the podcast and/or read the book. Ian Haney Lopez  shows us that the racism of the 21st century is far more seductive and pervasive than most well-meaning whites and people of color would like to admit. The podcast can be accessed via this link.
(images from the Philadelphia Inquirer)