Confession of a Recovering Racist 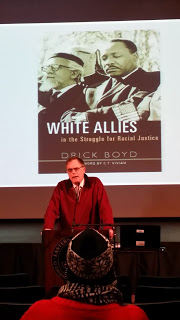 [On January 29, 2016, I spoke before a gathering of students, staff and faculty at Eastern University, speaking on the topic “White Allies for Racial Justice”. The following is an excerpt from that presentation in which I discuss why I call myself a “recovering racist.”]
Today just happens to be my father’s birthday. Today he turns 89. He lives is a skilled care facility in Minnesota. It just so happens that the year I will turn 89, if I live that long, will 2042. That year 2042 is the year demographers predict that a black or brown or Asian or Native American child will be born, and those folks who identify racially as white will comprise less than 50% of the U.S. population. At the younger age groups that shift has already begun to occur, but in 2042 it is predicted that in the U.S. population as a whole there will be no racial or ethnic group that can claim to be a majority. And most white folks are not prepared for living in a society they are not the dominant group both numerically and culturally; Most folks of color have developed what W.E.B Dubois called a double consciousness; knowing how to code switch so as to be able to operate successfully in a white dominated society. But we who are white folks have very little idea of how to operate in a world where white is the dominant group. We don’t know how to make the shift to living a truly multicultural, multiracial society.
And so while I hope what I have to share is relevant to every one of you here today, I particularly want to speak to those of us here today who identify racially as white, and what this changing demographic is challenging us to be and do.
But I want to begin with a confession: I am a recovering racist. I was born a white male into a white community that is part of a racist society and racist political structure which gave me privileges and access denied to others. I did not know I had these advantages, I didn’t ask for them, but from the day I was born doors were opened to me, opportunities presented to me, resources made available to me simply because I am white that gave me leg up on many others. I worked hard and people said I earned what I had achieved. And I didn’t know the game was been rigged, and because I was white, I had a huge head start.
I grew up in a community in suburban Minneapolis where most the people looked like me, thought like me and had advantages like me. I didn’t know any better. My parents were moderately progressive folks teaching me to care for others and for the world at large. We attended progressively minded church, where even in the 1960’s, our predominately white congregation had a partnership with a predominantly African American congregation. We were concerned for the suffering of people of color in our city, and beyond. Yet subtlely, almost imperceptibly, through things that were said and unsaid I was taught and socialized into thinking I was just a little bit better, a little further advanced. It was a progressive form of white supremacy, a liberal sort of racism where we were concerned and even willing to help as long as it did not disrupt our safe and comfortable world where we, the whites, still were in control.
I said I was a recovering racist. If any of you have been through a 12 step program or know those who have, you know that when a person completes the 12 steps, he or she never says they are a “recovered” alcoholic, or drug addict or gambler. They say they are “recovering”, because staying straight and healthy and free of addiction, is a daily commitment.

When I was in my 20’s doing youthwork I met a youthworker from Knoxville, TN named Jabo Cox. Jabo had been a heroin addict in his 20’s, but got clean, and hadn’t used in over 30 years. Yet he confided to me: “Drick, even though I haven’t used in 30 years, every morning I wake up and I want to take a hit, and I have to decide not to use.” That’s what it means to be recovering; it is an ongoing, daily choice to live and think another way.
Like a baby born to a drug addicted mother, I was born into a white culture addicted to the privileges and power of whiteness. And for the first 20 years of my life I didn’t realize how addicted to my privilege I was until I started to  become aware of my own racism, and for the last 40 years I have been working on my addiction.
So I don’t come before you as one who has things all figured out, but one in the ongoing process of recovery from the racism I was born with and born into..
But why do I say this, why do I share my struggles? I suspect that many of the people in this room, particularly those of you who identify as white, like me you are committed to fighting racism. However, if we are ever going to be able to contribute significantly to the fight against racism out there, we need to start by confronting and dealing with the racism in here. We have to confront our own blindness, our own ignorance, and our own fears and prejudices that we rarely speak, but know are there. We have to acknowledge and analyze our comfortable white bubbles that have been constructed all around us, and then burst those bubbles.  I think it’s virtually impossible to grow up white in the United States and not be racist.
William Sloane Coffin said many years ago:  “Racism is America’s original sin,’ and we and our white ancestors are the perpetrators and beneficiaries of that sin. We like to think of how great our nation is, but what we don’t want to admit is that it was built on stolen native lands with slave labor, on the backs of Latino and Asian, poor White laborers in a culture that used and degraded people of color all the while treating them as less than full citizens.  Part of our repentance and our healing is to learn and acknowledge that history, and seek find another way to live that doesn’t perpetuate the racism at the heart of our institutions and our culture.
Anti-racism activists such as Ewuare Osayande  and Mark Charles contend that the truth about the history racism in the US is a truth that has been largely denied by our education system and hidden from most of us. That history contains some hard truths we have yet to come to terms with. That truth of history and the reality of our present are painful to face.  That’s why so many of us White and even some persons of color run away from it, rather than face it. Dealing with our addiction to racism begins with acknowledging and grappling with the truth of who we are and where we came from historically and personally. Only then can we truly enter into our recovery. 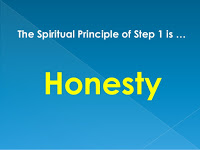