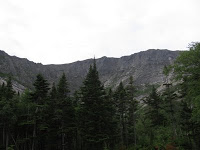 Every summer one of my goals is to climb a mountain. In some years I have had to stretch the meaning of the word “mountain” to achieve that goal, by climbing a hill that for some reason had been given a “mount” in front of it. However, the last two years I have climbed real mountains such as Croagh Patrick in Northwest Ireland two years ago and a peak in the Smokey Mountains of North Carolina last summer. This year I took on the ultimate test: Mt. Katahdin in central Maine (although central Maine feels like the edge of civilization). While only 5267 feet tall (by Rocky Mountain or Alps standards that is only a hill), Mt. Katahdin rises straight up from a valley basin. The only way up is to climb incredibly steep grades for 2 miles or more.

First, I had to hike 3.5 miles up a trail with a slight grade just to get to the base of the mountain at a basin called Chimney Pond. From Chimney Pond I began my ascent on the Cathedral Trail, a nearly vertical climb up huge granite boulders stretching for 1.7 miles straight up. Not only was I challenged physically, but I felt tested mentally, as if often did not appear to be any place to grab with my hands or push up with my feet. After 4 ½ hours (two hours hiking in and 2 ½ hours climbing up), I made it to the top.

When I got there about twenty other people were also there having come up from a variety of paths: two Canadians who came up Cathedral trail ahead of me, a bunch of teenagers and middle-agers, a family of 5 (including a seven year old girl), and group of four women who had completed their goal of hiking the entire Appalachian Trail in chunks over a period of 17 years (Mt. Katahdin is the northern end of the AT). From the peak I looked over the valley from which I had come and on the other side to the valley to the west. I saw the infamous Knife Edge, a 1.5 mile narrow ledge leading across to another peak. I saw Chimney Pond two miles below and I saw the lakes and valleys bond. I was tired but ecstatic.

After I had been up on the peak for about 30 minutes, a rain storm whipped up (some later reported the rain had even turned to small pellets of hail), and I began to feel my temperature drop. Not wanting to get hypothermia, I started what for me is the more difficult dimension of climbing, the descent. I headed down another way called the Saddle Trail, so named because of a broad plateau between Baxter and Hannigan peaks that looks like a saddle from below. After crossing the plateau, I began going down a run of loose rock, which the forest ranger said was easier than going back down Cathedral Trail.

Easier, yes, but easy, not at all. Loose rock made slippery by the rain made for a slow and at times treacherous descent off the mountain. Fortunately, there was no one on the trail above or below me because often loose rock cascaded down the run when I stepped on it. After two hours of slipping, and sliding, I was off the mountain, and then began a 4 ½ mile trek and slow descent back my car. In the valley the rain was falling much harder and what had been a trail going up was largely a mud bath coming down. Eventually, 9 ½ hours after I had started that morning, I arrived back at my car.

I have often wondered what it is about climbing mountains that attracts me; my college roommate who lives in Montana, writes for hunting and fishing magazines and spends days at a time in the wilderness, would call me an “Oh wow, the mountain guy.” I know that part of what attracts me is the mental and physical challenge of it. Several times while climbing the boulders of the Cathedral Trail, I thought to myself, they should never let an amateur like me on a trail like this. Mountain trails ought to be rated like ski resorts rate their trails (Easy, Difficult, Most Difficult, Expert). Yet in spite of my obvious limitations, I pushed past them, achieved something I was not sure was possible, and proved something to myself.

Part of what attracts me also is the total focus that climbing requires. Going up I had to think about every hand hold and every place I was going to put my foot. Going down, I had to think carefully about every step I was going to take lest I twist a knee, sprain and ankle or take a fall. When I got back my room, I noticed I had scrapes all over my leg. I had not even noticed them or my blistered toe, because my mind was so completely focused on the task of climbing up and then down.

Also, there is something concrete about climbing mountains that is refreshing. I spend so much of my time in the realm of ideas and speculation; it is nice to have something tangible to point to as an accomplishment. While ambiguity and critique is a big part of what I do in my work, a mountain is something I can say, “See, there it is and I climbed it.”

I suspect that perhaps part of what drives me to climb mountains is because overall I have lived a fairly privileged and comfortable existence, and I find exhilaration in pushing myself to the edge of survival. People I know who grew up poor, or are poor, generally don’t do things like climb mountains, even though it is a relatively cheap form of exercise, because they have had to scrounge out life to survive each day. Yet for me, climbing mountains pushes me to a place I don’t often go. As I was climbing up the boulders of the Cathedral Trail, I thought, you know, I could die up here. Weird, I know, but somehow it fills a deep need within.

No doubt there is something deeply spiritual about mountains for me. The psalmist wrote: “I lift my eyes to hills, from whence comes my help” (Psalm 121.1). Mountains in some mysterious way remind me of my humbleness and the grandeur of God. Thomas More (Care of the Soul) says that there are inner drives and longings that emanate from deep yearnings within our souls. For me, climbing mountains does something for my soul.

Frankly I am not sure why I get off on climbing mountains. All I know is that when I got back to my car, I felt a huge sense of relief and satisfaction, having tackled one of the most challenging climbs I have ever attempted, and having lived to climb another summer.