Celebrating Thanksgiving in the Shadow of Standing Rock 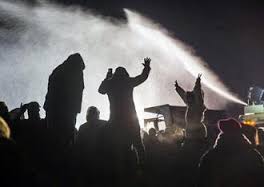 I write these words on the Sunday after Thanksgiving. Like many others, I gathered with family to celebrate the Thanksgiving holiday. We gingerly discussed the election, and our thoughts about the future, but mostly we caught up on our personal and family lives because in my family this is the one time a year many of us see each other. However, for me in the back of my mind throughout were the water protectors and their supporters in the watershed area around Standing Rock, North Dakota. On November 20, the Sunday before Thanksgiving, police used water cannons, rubber bullets and tear gas against a group of about 400 folks standing unarmed on a bridge. Watching the video, I could not help but think about the scenes from Birmingham, Alabama in 1963 having water cannons loosed on them such that young people were driven across the park by the force of the water. 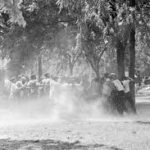 The mainstream media refers to the resisters on the Standing Rock bridge as “protestors”, but they have asked that they be called “water protectors;” I honor their struggle by using that language. While this struggle has been going on for months, the mainstream media has only caught up on it in the last few weeks. As a result, what is little known or mentioned in this conflict is that the original plan for the pipeline was to go near the city of Bismarck. However, the predominantly white residents of the city understandably objected, and so the route was changed to go through Native American land. Once again, land set aside for the water protectors was taken over when it became inconvenient to the cause of oil for profit. This is not an “unfortunate” or recent conflict, it is an ongoing act of resistance to further, exploitation, discrimination and degradation.

As part of his Thanksgiving greetings to the staff and faculty of Eastern University where I work, President Robert Duffett wrote:

America’s first Thanksgiving festival was truly a life and death celebration. In 1621 Governor William Bradford commemorated the first year anniversary of the landing in Cape Cod of a group of religious separatists from England whom we call Pilgrims. He invited Massasoit, Chief of the Wampanoag tribe, and the first Americans of that area to celebrate with them. This was a fitting invitation of multi-cultural respect, appreciation and thankfulness. Simply put, the 100 plus Separatists who left England owed their life to the kindness, generosity and wisdom of the Wampanoag tribe. The crossing was difficult, half died in voyage, most were starving and sick on arrival. Massasoit and others taught the undocumented aliens how to fish, hunt, tap trees for syrup and plant corn. The Pilgrims were eager pupils and the Wampanoag good teachers. The harvest was plentiful in the fall of 1621 ~ thus the official celebration.

Thanksgiving, then like now, is a time to thank God for God’s goodness, love and blessings. Yet, perhaps we ought also thank God for those who helped and encouraged us along the way ~ like Massasoit and the 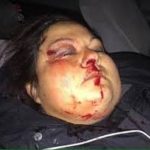 Without wanting to dismiss Pres. Duffet’s gracious words, I am struck by how they stand in stark contrast to our reality. Somehow the “multicultural respect, appreciation and thankfulness” has long been forgotten. The idyllic scene of the first Thanksgiving is not only betrayed by the history of Native American genocide that followed it, but also by the water cannons at Standing Rock. White Supremacy, capitalism, Corporate power – call it what we will – still dominates, no matter what the issue.

As I have done for Thanksgivings for several decades, this past week I took time to make a list of all the people and events in my life for which I am thankful. However, because of the xenophobic tone of the President-elect and the harsh reminder of Standing Rock, I am also be moved to acts of resistance. We are now in a new Civil Rights era complete with the tools of repression from the Civil Rights Movement of the 1950’s and 1960’s.  Let us turn our gratitude to action and thankfulness into resistance to the powers that be. 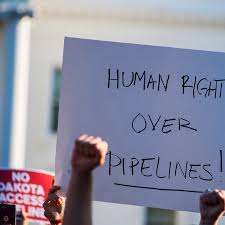