Cairo, Madison and the Nature of Grassroots Democracy 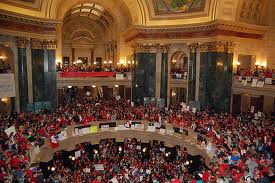 Tunisia … Cairo … Jordan … Iran… Bahrain … and now Madison, Wisconsin. Something is happening around the globe in this age of instant telecommunication – there is an outbreak of democracy the likes of which have not been seen in a long time. Wisconsin Governor Scott Walker won last November’s election by 52% to 46%, got his party’s majority in both houses and so felt he had a “mandate” to do whatever he liked to balance his state’s budget, but he overplayed his hand when he sought to take away the bargaining rights of unionized state workers. In so doing he sought to eliminate the rights of state employees to have a voice in determining their own economic future. The people reacted strong and loud. What was at stake is the meaning of democracy, as Lincoln said, government of, for and by the people. 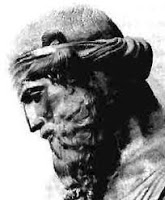 Walker stands in a long line of leaders going back to the Founding Fathers and even Plato, the author democracy, who only believed in a limited kind of democracy. Their view of democracy says: “We’ll give you a chance to vote every 2, 4, or 6 years from a limited list of candidates that we will provide you. Then we’ll open up the doors to folks with money – namely the wealthy and the corporations – to finance this electoral show, a winner will be announced, and you good people just trust us until the next election.” However, something changed. First, the Tea Party folks said – wait a minute, we have a voice that needs to be heard. Now while I realize that some of the Tea Party moves were orchestrated by conservative corporate interests and big media, and I don’t agree with much of their politics, there were lots of normal folks who just were not willing to sit back and wait for two more years. Now finally, the progressive grassroots has awakened and the message that is coming out of Madison is “we want a seat at the table too; we will not be rendered voiceless and powerless.”

The Bradley Foundation, the major supporter of Scott Walker’s gubernatorial campaign states that its mission in part is “committed to preserving and defending the tradition of free representative government and private enterprise that has enabled the American nation and, in a larger sense, the entire Western world to flourish intellectually and economically.” They go onto say that what that commitment means is to “support limited, competent government; a dynamic marketplace for economic, intellectual, and cultural activity; and a vigorous defense, at home and abroad, of American ideas and institutions.”  Sounds well and good, so why support an effort to take away one of those rights, the right to advocate for oneself and one’s interests? Could it be those vaunted “American ideas” are only applicable to the select few who have the money and power to influence decision makers?

The Koch brothers, other major funders of Walker’s campaign and major donors to the Americans for Prosperity Foundation, are not interested in what works for the average person, but rather removing all restrictions and guidelines to those who seek economic gains in the name of unbridled capitalism. Why else would Walker opt not to tax the wealthy or the corporations but instead demand the union give back benefits, and give up bargaining rights? The Koch brothers want democracy in the sense that limits the benefits to them and others of their ilk.
The response to this kind of doublespeak and hypocrisy is long overdue. The challenge to the ever-widening gap between the haves and have-nots in this country has been slowly emerging. The poor have completely dropped out of the conversation, but now the assault has come on the middle and working class folks, and they are better organized than the poor. The middle class working folks are earning less and being asked to give up more, while the wealthy and the corporations continue to get favored status. Something had to give … maybe it has started to do so.
The challenge going forward is not simply to protest on capitol steps or march on Washington, but rather to build a kind of process where folks gather to discuss issues and concerns in coffee shops, town hall meetings, Facebook pages and blogs. It will require that progressives to talk with Tea Party folks and the working poor interact with CEOs, where shouting and chants can be transformed to listening and true dialogue. Sounds ideal but the folks with the power – the corporate leaders, the wealthy political donors, the huge lobbying organizations – are not going to be easily persuaded to let go of their privileged positions in the shadows and come out for an honest, open forum. There is still much work to be done do to force them into the light, before these conversations can happen. The issue is not about Republicans or Democrats, because both parties are active players in the rigged game. It goes beyond the choices we have been publicly presented to those who are pulling the strings from behind. For in the end the real enemy of grassroots democracy are not the political front men like Scott Walker, but the economic interests he and most politicians serve. Revealing and challenging that enemy will require research, analysis and dogged perseverance.
Just as countries such as Egypt must build an entirely new political infrastructure, so too we in the United States are only at the beginning of building a new understanding of what democracy means and how it works. This view of democracy is radically different than what has been practiced recently in this country. It is radical because it takes the onus out of the state houses and into the communities. It is radical because it challenges us to be informed and active. It is radical because it challenges the economic policies and structures that have benefited the few at the expense of the many, and to which most Americans have become all too accustomed, and to which they have resigned themselves.
Frankly, I don’t know what to expect in the months and years ahead. I hold a cautious optimism that people can wake from their blind political stupor, and let the Scott Walkers of the country, and even more so those funding his campaign, know that the game has changed, and that democracy as we have known it is in fact becoming more democratic.