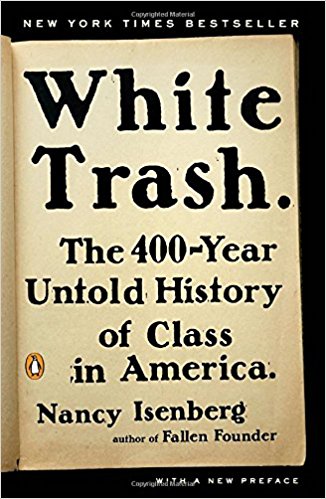 Like Howard Zinn’s A People’s History of the United States and Ronald Takaki’s A Different Mirror: A History of Multicultural America, Nancy Isenberg’s White Trash: The 400-Year Untold History of Class in America, tells a part of US history that is not only ignored but greatly distorted: class distinctions. She begins by relating Great Britain’s effort to rid its country of debtors in prison and the poor, which they called “waste people”, by sending them to Jamestown, the new colony in Virginia. Having visited the Jamestown living history site, I was appalled to learn of the desperate conditions that simply allowed 80% of these “waste people” die in the first several years. This theme runs through history and Isenberg does a masterful job of telling the the ways in which the ruling elite despised, manipulated and used the poor whites to advance their own efforts to amass wealth and power. She tells of African slave-white indentured servant rebellions in the precolonial period, the denigration and abuse of Irish immigrants, the South’s use of poor whites to fight the war to preserve a slavery that deprived them of living wages, the myths of individual destiny obliterated by the Great Depression, the emergence of the first “white trash president” Lyndon Johnson, the manipulation of Ronald Reagan, the elitist undermining of later Southern presidents Jimmy Carter and Bill Clinton, and so much more.

As I read this book, I found myself feeling alternately angry and ashamed: angry at the lie of American exceptionalism and individualism and ashamed that my people largely came from the privileged class that despised and denigrated the poor whites. I knew of the way Southern plantation owners and aristocrats used a “divide and rule” strategy to set poor blacks and against blacks and Native Americans, but the book highlights the many ways in which popular culture was used to reinforce the class consciousness that separated folks, while all the while touting the myth of individual achievement and assimilation. While not covered in the book, one could not reflect on the recent US presidential election where a wealthy real estate mogul conned a whole class of white working class folks to vote for him. In the tradition of great pretenders like Huey Long and Ronald Reagan, Trump was able to tap into their consciousness, while touting policies that actually will hurt the poor of all colors, if his policies are enacted.

White Trash is a book that all concerned adults should read. It will challenge and outrage any reader in many ways. One may not always agree with her interpretation of events or statements, but the weight of her evidence and the stories she tell are compelling.