Big Government or Big Business – Hold Your Nose Because Both Stink! 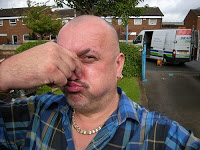 Last May my daughter graduated from college. Because of the recession, she has not been able to find a full time job. In October she caught a virus (not H1N1 gratefully) and had to go to a hospital emergency room. She had no health insurance. As a single person with no job picking up the health insurance tab, she was on her own. We helped her pay the bill, but it brought home in a deeply personal way, the need for health care reform in this country.

This coming week the House of Representatives is scheduled to vote on a Health Care Reform bill. While I am in support of passing the bill, I do so holding my nose at the inadequacy of this proposed bill. In my mind it is better than nothing because people unable to afford health insurance will have an option, but the failure of the Congress, particularly the Democrats, to really tackle the problem of exorbitant costs and rapacious profits of the health insurance companies is both damning and discouraging.

For example in an appearance before Congress, Angela Braly, CEO of Wellpoint Health, the parent of Anthem Blue Cross and Blue Shield, with a straight face justified a 39% hike in premium costs in California, while she admitted to a nearly $200 million salary. In fact this year was one of Wellpoint’s most profitable.(See a clip of Ms.Braly’s testimony here.) While the conservatives are shouting that the health care bill is “big government” because the bill uses taxpayer money, we need to also recognize that the bill provides subsidies to be paid to health insurance companies without any significant effort to rein in their profits and premiums. While I do not doubt the cost to the government in this bill, what is unconscionable is the unprecedented profits to the health insurance companies. Whether the bill passes or fails, the health insurance companies like Braly’s Wellpoint will still come out making billions.

I am reminded of how following Hurricanes Katrina and Rita hit in 2005, the oil companies jacked up their prices to over $4/gallon because their “refineries were down.” Amazingly, the oil companies posted record profits that year. It was so nice of oil companies to share their pain with us! Now the banks and the health insurance companies are doing the same. The population as a whole suffers and tiny elite profits in ways that are beyond imagining. When companies began becoming “incorporated” in the late 1800’s, part of the understanding with becoming incorporated was that a company would do business with the common good in mind. Tragically, with many companies, especially banks, big business and now health insurance companies, that is no longer the case.

In a recent article Trudy Rubin discussed the government provided health care in several European countries. While the French and the Germans provide health care for all their citizens at 10 and 11% of their GDP respectively, the US spends 17% of its GDP on health care and doesn’t cover everyone. Whereas US health insurance companies generally have 20% overhead (for those bloated salaries, stock options, and other executive perks), France and Germany spend only 5% in administrative costs. France and Germany don’t have to advertise their health care as it is provided to all. However in this country the health care industry invests millions of dollars in is lobbyists and advertisements that obfuscate the true state of our health care system, and redirect our attention away from the abysmal quality of life of millions of people in this country must endure.

Last summer when Pres. Obama started proposing the health care reform bill, it included price controls and the so-called “public option,” which put the for profit companies in competition with a non-profit provider. Now all of that is gone. If the bill passes, it will hopefully enable my daughter to get affordable health care; we’ll see. However, whatever company she chooses to go with, it will not be making any sacrifices to make health care available to her or anyone else.

Yes there will be a big price tag for health care, but let’s be honest and note where those dollars are going — right into the pockets of the companies that already have been sticking it to us all along…and unfortunately will continue to do so, no matter what. So the argument about big government is only true because big business is ripping us all off.