A Sinner and A Saint Pass Away 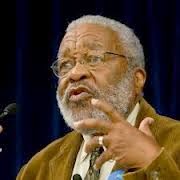 This past week saw the passing of two notable figures from the Civil Rights and Watergate eras. On Monday, May 19 Vincent Harding passed away at the age of 82. He was a long time Civil Rights activist, speechwriter and friend of Martin Luther King Jr., theologian, and historian of the African American struggle in the United States. In recent years he was an elder who often shared perspective and wisdom from his long decades of activism. This past summer Krista Tippet interviewed on her weekly radio show “On Being” in which he reflected on the lessons of the past and his hopeful view of the future of progressive Christian activism.

While I only met Harding once and that only briefly, he was a person in recent years I had come to greatly respect. His book There is a River: The Black Struggle for Freedom in America opened my eyes to the heroic resistance of Africans to their enslavement and torture, thereby challenging the myth of the “passive Negro” who was simply victimized by the European slave traders. While acknowledging the brutality of slavery Harding describes in detail the ways in which the Africans asserted their dignity and humanity in a dehumanizing and inhumane era. The book captured for me gentle fierceness Harding displayed in his writing and speaking over the decades.

My one meeting with him occurred in 2009 when I participated in a conference on peacemaking in Philadelphia. Each night at the end of the proceedings Harding would offer his reflections and challenges to the mostly white liberal crowd. As an elderly African American in a mostly middle aged white crowd, he seemed an odd participant in that gathering until I realized that as a Mennonite (a overwhelmingly white peace church), Harding had been both a lifelong peacemaker and a boundary crosser who spoke truth wherever he went and to whomever he was speaking. As part of that conference, I was one of twelve people who committed and civil disobedience against a gun shop known for its active participation in the straw purchasing/illegal gun trade in Philadelphia. Out of that action Heeding God’s Call, an interfaith gun violence prevention organization, was born. To this day HGC continues to call attention to the need for common sense gun legislation to reduce the senseless killing from illegally purchased firearms. While only indirectly involved, Vincent Harding was a source of inspiration to many of us coming out of that event and that conference. His example and his words will be missed.

Nine days earlier on May 11, at the age of 79 Jeb Magruder died at his home in Danbury, Connecticut. Unlike Harding whose influence and image grew positively with age, Magruder spent much of his life undoing disgrace over his involvement in the Watergate scandal that took down the administration and presidency of Richard Nixon in the 1970’s. For those too young to remember, Nixon aides inexplicably broke into the offices of then-Democratic presidential candidate George McGovern; during the 1972 presidential election campaign those offices were located in Washington, DC’s Watergate Hotel. The subsequent investigation of the break-in revealed pervasive corruption in the Nixon administration that eventually sent several Nixon aides to jail (including Magruder) and caused Nixon to resign in disgrace in 1975. I remember watching the Senate hearings in the summer of 1973. Until that time U.S. political leaders were generally considered to be honorable men (they were virtually all white men at that time), and what the public didn’t know about their personal lives or backroom dealings it didn’t really want to know. All that changed after Watergate, such that today politicians are generally assumed to be corrupt until they prove otherwise. Furthermore, Watergate is why subsequently any high-level government scandal is always referred to as a “-gate.” The most recent example is “Bridge-gate” which involves aides to New Jersey Republican Governor Chris Christie using their political power to make driving on the George Washington bride intolerable for residents of Fort Lee, which has a Democratic mayor who refused to support the governor’s run for re-election.

I met Jeb Magruder around 1977 about two years after he had served a seven month jail term for his involvement in the Watergate scandal. He attended a monthly prayer breakfast of movers and shakers in Boston that I was privileged to attend (not because I was a mover or shaker, but because the organizer of the event, Tom Getman, was the regional director for Young Life, for whom I worked at that time). Jeb Magruder came as a special guest and shared his story with the group. I was impressed by the honest contrition of a man who knew he had gotten caught up in something that betrayed his basic values. He did not try to rationalize away his part in the scandal but took full responsibility for his actions, and talked about how the ordeal had changed his life dramatically, so much so that he left the business and political worlds to become a Presbyterian pastor. Following the meeting, I gave him a ride to the train station, and had the opportunity to talk personally with him. When he learned I had recently graduated from Duke University, he told me of a classmate and acquaintance from my class who had been instrumental in helping his son deal with his father’s disgrace. Despite his past experience at the highest level of government, he expressed a genuine interest and respect for my work with street kids in the Jamaica Plan neighborhood of Boston.

While the Watergate scandal has indelibly caused me to be suspicious of those in place of political power, my brief encounter with Jeb Magruder showed me that often decent, well-meaning people can get entangled in systems that distort and contort them into becoming people even they themselves despise. While I did not follow Magruder’s career after our brief interaction, I have since rarely met a person who was so honest and repentant about his sins, and yet who authentically experienced God’s transforming power and grace in the aftermath of his downfall.

Vincent Harding the saint and Jeb Magruder the sinner were people who had a deep impact on the people and events of their time. Their lives significantly impacted the society, institutions and culture in which they lived. I am sure that those who knew them personally can further testify to the power and integrity of their influence. From a far more distant vantage point and briefer interaction, I too was touched by their lives. For these reasons I mourn their passing while celebrating their contributions to my life and to history.