A Lament for My Republican Friends 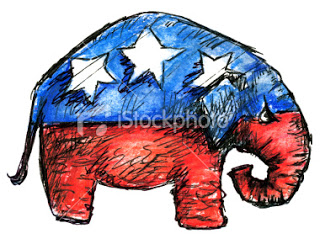 In recent weeks, I have had this recurring thought: “Boy, sometimes it must suck to be a Republican.” No one reading this blog on even a sporadic basis would mistake me for a Republican, but some of my friends and perhaps half of my family are. I grew up with parents who were and still are staunch and lifelong Republicans. I can honestly say some of my best friends are Republicans. And in a strange way I feel for them these days.
So what has led to this unconventional political empathy?
Well, the ink hadn’t dried on the Supreme Court’s decision upholding the constitutionality of The Affordable Health Care Act, and Republicans were eviscerating their (now former) hero Justice Roberts for voting with the majority, and proclaiming that one of their main arguing points in the upcoming elections will be dismantling what they derisively call “Obamacare.” I had just returned from Scotland, where everyone has access to free health care (and I might add free college tuition), and thought “how can you be against providing for basic health needs?” They claim we would have to pay a “tax” (their term), and yet if you read the fine print according the nonpartisan Congressional Budget Office, only 1.2% of the wealthiest Americans would pay the extra fee. So how can people live telling this lie, so that they can’t be against investing in people’s health? What kind of twisted logic does one have to live with in that state?
Republicans say they are for balanced budgets in state and federal governments (which sounds reasonable), but in such an unbalanced way. For example, the Republican-controlled Pennsylvania legislature just passed this year’s budget, and two numbers jumped out at me. The first was $150 million cut from the budget eliminating the “General Assistance Program”, a minimal cash assistance program for the poorest of the poor. The second number was $300 million in tax cuts for the businesses of the state, especially the  cash-rich gas companies drilling in the Marcellus Shelf region. $150 million taken from the poor, while $300 for the corporations – couldn’t we have balanced that out a bit to keep the minimal stipend for the poor and only give the corporations $150 million in tax breaks? Of course then we would have to look at other cuts in public education, health care (there it is again) and basic social services.

Then there is poor Mitt Romney, who says he left Bain Capital in 1999, and yet all the documents say he was in charge until 2002. Apparently in those three years Bain made some decisions that shipped a lot of jobs overseas, which doesn’t look for a guy who says he is an expert at creating jobs. However, I don’t really think it matters because whether he left in 1999 or 2002, I think it’s clear that Romney made his millions making decisions that made lots of money for investors, often at the cost of workers either here or overseas. While the media focuses on the back and forth between Pres. Obama and Candidate Romney on who is the bigger liar, the point is that it was high financiers like Romney and his friends who drove the economy to its current state of collapse, and whether its Goldman Sachs or Morgan Chase or Barclays, the pattern is the same, the leaders made those decisions knowing (1) they would or could hurt the regular investor, while (2) making themselves a whole lot of cash. I must say these guys are really adept at trying to cloud the issue, but the “bottom line” (their favorite phrase) is that they knowingly invested in ways that would benefit themselves, regardless of the cost to others. Those are Mitt’s people, that’s what they do, and he has profited by it, regardless of when he left Bain.
Then there are the other Republican positions on issues that cause me to shake my head, like being against allowing kids brought to this country at a young age and who grew up here to have a pathway to citizenship by way of the Dream Act. Or denying gay couples the right to get married legally. Or dismantling public school systems by defunding them and then blaming the teachers for doing a lackluster job, when in fact time and again it has been shown when schools have adequate resources, up to date materials, and small class sizes the overwhelming majority of kids can succeed. Then there is the fact that Republicans are in the pocket of the National Rifle Association, who oppose any and all gun buying restrictions, when other developed nations who have such restrictions are much safer from gun-related violence, and their hunters still get to go out and shoot. All of these Republican positions seem either ludicrous or just plain inhumane.
Now I know there are arguments for all of these and other Republican positions. However when I explore their views I find they are either logically inconsistent or just plain mean-spirited. My Republican friends and family members are very intelligent, kind and generous people, which is why I feel for them. Now I am sure they must wonder how I can support Obama, which I will say I am lukewarm at best, but only because he has not lived up to his promise. I would have had him go much further on these and other issues than he has gone. And I think the Democrats on the whole have been spineless at times. So feel for me if you will, but my heart goes out to Republicans. How do some of them live with themselves? How transparently greedy and callous does one have to be before he or she looks in the mirror and wonders what you have become?
That’s why I wonder how it must feel to be a Republican; if I were one of them, I would get rid of the mirror, because I wouldn’t want to face myself.