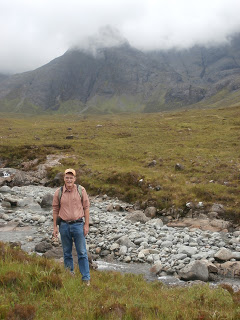 This picture was taken on Saturday, June 23, 2012 in the Cullin Hills, Isle of Skye in Western Scotland and represents the fulfillment of a dream. I am with my family on the Trail of the Fairy Pools, a gentle trail that follows a stream up the mountainside and then across the base of the mountain and back down. Altogether the trek took about 4 hours.
Over a year ago, I offered my family the chance to go to Scotland as a Christmas present, and after some minor haggling we chose the last two weeks of June. In making this offer, I had come to realize that my children were growing up and moving on with their lives, that Hannah the oldest was getting married, that Esther was considering moving far away for grad school, and that Phoebe was graduating from college; the opportunities for us to all be together for any length of time would become more difficult to arrange. This was going to be a special time for us to see the country of our Boyd heritage and for me to walk in the Scottish Highlands.
However, about nine months ago, I started having serious difficulties breathing and my foot mysteriously began to hurt so much that on many occasions I had to use a cane. I changed my primary doctor to a young energetic advocate of alternative treatments and preventive medicine, and at our first visit he asked me, “What are your goals?” to which I replied “To hike in the Scottish Highlands with my family in June.” He sent me to a heart specialist, who talked to me about diet, particularly lowering my cholesterol, and she too asked me what my goals were, to which I replied “To hike in the Scottish Highlands with my family in June.” He also recommended a podiatrist, and after several visits, an xray and a MRI, she in turn sent me to a physical therapist who asked what my goals were and again I replied “To hike in the Scottish Highlands with my family in June.”
At the doctors’ urging I changed my diet and to date have lost nearly 30 pounds. The podiatrist told me that all my years of running, basketball, skiing and spraining my ankle in all three, had left the ligaments and tendons in my foot shredded and so I had to rebuild the muscle in my foot. So I did daily stretching and strengthening exercises. I took walks, rode bike, went to the gym and generally worked slowly on strengthening my foot and overall stamina.
However, the most important thing I did was change my mental outlook. When people look at me “fragile” is usually not a word that comes to mind, but that was the way I was beginning to feel about my physical health. Everything I tried seemed to turn out worse than before, and I had become defeated about the likelihood of regaining my former strength and vitality. I had often said that when it came to my physical health I want to “wear out rather than rust out,” but it felt like the wear out time had come earlier than I anticipated. However, as 2011 turned to 2012, I decided that I was not going to let my physical struggles decide my self-concept. I decided I would do all I could to be healthy for Scotland. While I would like to say my mental attitude changed everything, what changed frankly was my perspective. I was going to go to Scotland; the only question was in what condition.
And when mid June rolled around, I was ready. We started in Glasgow, explored Dean Castle (the historic home of the Boyd Clan) and visited Stirling, St. Andrews and Loch Lomond. We drove through the Highlands, searched for Nessie in Loch Ness, hiked in the Isle of Skye, and walked the streets of Inverness. Then we ended our trip in Edinburgh, climbing Arthur’s Seat just outside the city, watching the Scottish Guard practice in anticipation of the Queen’s Jubilee, walking the streets of old Town, and roaming in the Edinburgh Castle. Our last night was spent on a sheep farm west of Glasgow. The picture above captures it all, as well as the one below taken on our last meal together in Scotland. These pictures represent a special gift. To be able to hike and share a beautiful place with the people I love: a dream come true. 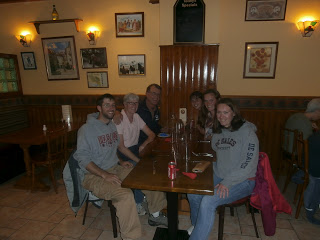