In my first or second year of college I read C. Vann Woodward’s classic history of the segregated South, The Strange Career of Jim Crow. I don’t remember what impact it had on me back then, but for some reason I hung on to the book. I recently reread the book as part of an effort this summer to reacquaint and deepen my understanding of the Civil Rights Movement of the 1950’s and 1960’s.

Woodward orginally wrote the book in 1955 just after the 1954 Brown vs. Board of Education Supreme Court decision calling for the desegregation of public schools. A revised edition was published ten years later in 1965; this was the edition I read. Woodward ends the second edition recounting some of the major civil rights events of 1965 including the march from Selma to Montgomery, passage of the Voting Rights Act and the riots in the Watts section of Los Angeles. (Noticeably absent was any mention of the assassination fo Malcolm X.) For Woodward the 1965 Voting Rights Act marked a legal end to Jim Crow segregation, and he ends the book on that cautiously hopeful note.
However, in his conclusion to the second edition Woodward signals his own ambivalence about the future of civil rights for people of color in the U.S. Of conditions in 1965 he writes: “For the great majority [of black people in the U.S.] the gap between the races in income, education, employment and opportunity was still very large and for many it was growing even larger. Many Southern Negores might sense tangilbe gains from a low starting point. But the majority of Negroes now lived outside the South, and three-fourths of the whole Negro population lived in the cities.There they felt themselves losing out in comparison with other Americans. Even in full possession of civil and political rights they would still face unemployment, urban decay, family deterioration, entrapment in slums and de facto segregation in housing and schooling. These were grave social problems that lay largely beyond the reach of civil rights laws and called for broader and more drastic remedies.”
Reading these words nearly 50 years later in light of the Supreme Court’s decision to invalidate the Voting Rights Act, the George Zimmerman verdict, the recent news that the city of Detroit will file for bankruptcy and the growing gap between haves and have-nots in this country, one can easily wonder how much has changed in that time. In his recent remarks following the George Zimmerman trial, President Obama said he believed the disparities and tensions between the races was improving; however, many have questioned how true that is for the vast majority of black people. As the response to the Zimmerman trial has made clear, there are many aspects of racism and poverty in this country that either can’t be or are not being addressed by our legal, political or economic system. As Woodward said nearly 50 years ago “broader and more drastic remedies are needed.”
When I consider Woodward’s words I am troubled and humbled by the challenge that faces us. In the U.S. we have an economic system that promises to reward hard work and dedication, but in fact privileges those that have resources. We supposedly have a democracy, but as I have often commented in this blog our system currently operates as a plutocracy (rule of the rich) and not a democracy (rule of the people). As evidenced by the recent responses to the George Zimmerman trial, we have a system which does not seem to recognize the needs or desires of a significant percentage of the population that happens to be poor and/or non-white. When one looks at the state of affairs through the eyes of those who have been cut out of the prosperity and “recovery,” Woodward’s words seem quite prescient.
I don’t have a crystal ball to be able to say what needs to replace our current system, but I have some ideas. What we currently call capitalism needs to be dismantled into regional economies that are more accountable to the communities in which businesses operate. Banks and businesses need to be accountable to local communities and can not take without also contributing in significant ways. Local, regional and national elections need to be publicly funded and not subject to super-PACS funded by the super rich. Basic rights need to be established for health care, quality public education, housing, and basic income. CEO salaries need to be capped at a certain ratio of the lowest paid workers in their company; all should benefit by a company’s success, not just those at the top. Taxes should be waged not only on the basis of an organization’s income, but also their benefit to the local community, and impact on the natural environment. Laws and policies disproportionally hurting the poor or persons of color need to be re-examined.
At the same time people and local communities need to take responsibility for their own safety and security. Violence, drugs or other things detrimental to a community’s well being can best be addressed by the people in those communities. Churches, community centers, community groups and the like need to work at bringing folks of different lifestyles and cultures together to address local problems Local groups need to develop grassroots leaders who care for the people in their neighborhoods and seek to help folks solve these local problems. For democracy to work as it should, it needs to be an everyday thing, and not an event once every two or four years.
Even as I write these things these ideas seem impossible, like unrealistic pipe dreams. Yet these are the kind of broad and drastic changes Woodward saw was needed fifty years ago, and are still needed today. As the racial justice activist Anne Braden once said: “The impossible just takes a little longer to achieve.” The time to get started is now. 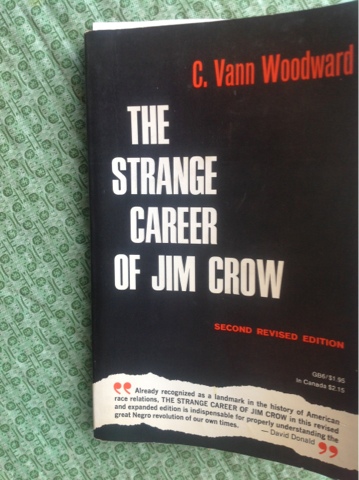